"It is the remains of a mountain - sized meteorite that plowed into the ground in northwest Iowa near Manson, about 74 million years ago."

"...the samples we're looking at were formed by an event so powerful, it shattered the very bedrock into pieces, some the size of pinheads, hurled the fragments for miles around to be mixed with other rocks of different vintages, and liquified the earth into a cauldron of molten rock wider than an Iowa county." 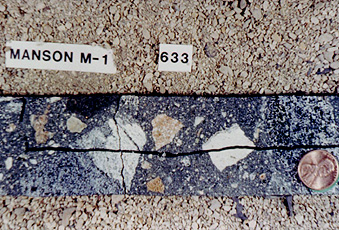 During 1991-1992 12 research cores were drilled into the Manson Impact Structure. As a result the researches found 6 main types of impact materials unique to the impact.

This information was obtained from the Abstract: Impact Materials Recovered By Research Core Drilling In The Manson Impact Structure by R.R. Anderson, B.J. Witzke, and J.B. Hartung

The Form and Structure of the crater's impact

Study of the Manson Impact Structure (MIS) Drill cores, cutting samples from water wells, and seismic data has led to a good understanding of the geometry of the well-preserved impact structure.  The sequence of events that formed the MISwas typical of most complex impact structures (impact structures with central peaks).

A hypervelocity impact excavated a crater by vaporizing, melting, and brecciating target materials, ejecting them form the crater and depositing them as proximal and distal deposits.  Additionally, some target material was physically pushed down and out, lifting up the crater rim.  At its maximum diameter this cavity is called the transient crater (because it is short-lived).

As the transient crater reached its maximum size, its internal pressures had dissipated sufficiently that it could no longer hold up the uplifted crater rim.  Gravity began to pull the uplifted rim down, creating an annulus of down-dropped blocks (the terrace terrane) and forcing up a central peak.

The MIS drill and seismic data define a broad central peak (about 6 km in diameter) and a broad terrace terrane (about 7 km wide) forming an annular ring at the outer edge of the crater.

To Learn more about the Manson Impact Structure and to read the full articles/reports please visit the library!